Cause of surfing takeoff failure(1)-Why don’t you go catch the waves? It’s a mistake to just wait 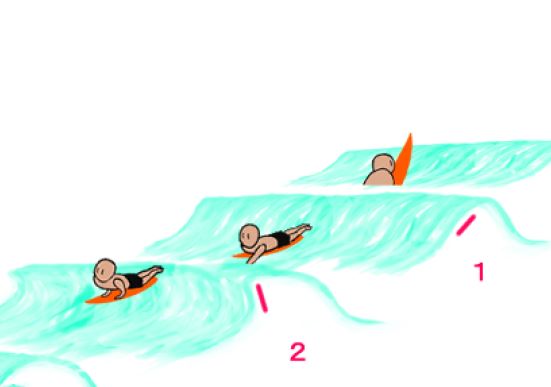 I can’t take off well. When I paddle to take off, the surfboard doesn’t move and the waves leave me behind. Or the waves break, fall, and I am swallowed by the waves.

That’s because you’re not in the right takeoff position.
It fails because it doesn’t understand the overall flow of the takeoff.

What should I do?

First, check the waves before entering the ocean. Are you checking the waves?

I’m sure your check method is bad. Let me teach you how to check the correct waves.

Thank you. What should I do after that?

Once you know the state of the waves, you can see where and what kind of waves are breaking. Then plan where to aim for the waves and head to that location.

I had never planned.

Next, what to do after entering the sea. Are you going to catch the waves?

What does it mean to go catch?

You are misunderstanding. You’re just waiting for the waves.
It is important that the surfer moves to the correct position to catch the waves. This time I will talk about checking and planning the waves and moving to catch the waves. If you can understand these, the success rate of takeoff will increase dramatically.

Plan
× Make a plan after entering the sea

○ Make a plan before entering the sea

Action
× Wait for the waves at the same place
〇 Predict the break of the wave and move to the optimum place with a paddle.

Make a plan before entering the sea

You have arrived at the sea.
You may want to enter the sea right away.
But please be patient. Check the waves before entering the sea.

Judge the wave you are aiming for

Where do you want to ride the breaking waves?
For example, inside, outside, right side, left side, and so on.
Checking from land makes it easier to understand the condition of the entire wave
than checking after entering the sea.

Depending on the conditions of the day, the waves of the set will come every few minutes.
Let’s check how many minutes the set interval of the day is.
Check for at least 10 minutes, preferably 15 minutes.

Also, beginners will find it difficult to catch the waves in crowded areas.
It’s a good idea to aim for a place where you are vacant.

There are places where you can go because it is dangerous.
For example, the current is fast, there are dangerous rocks, and so on. Let’s grasp the point information in advance.

Action after entering the sea

You paddle out and arrive outside.
Check out the wave breaks.
The shape of the waves is different every time.
Observe the characteristics of the waves of the day.

Then decide what kind of wave you want to ride.
When you are a beginner, it is difficult to judge which waves you can ride and
which ones you cannot ride.
The waves that can be taken off are just vertical just before the break.
Look for such waves. Paddling in the vertical direction of the waves allows you to successfully take off.

Check out the following articles for takeoff position

Move the best place for take off

Don’t wait for the waves without moving in the same place.
The waves don’t always break where you’re waiting.

You find the swells coming from far away offshore earlier than anyone else.
Then predict where to break.
The place offshore from the break position is the place to start the paddle.
You need to move quickly to that position. Again, don’t wait. Move to catch the waves.

Take-off failure / The case you are swallowed by the waves

I make this mistake.

Do you know what’s wrong?

The position to start the paddle is wrong. Should I move more offshore?

Take-off failure / The case where the waves leave you behind

I also make this mistake.

Do you know what’s wrong?

The position to start the paddle is wrong. Should I move to the shore more?

That is the correct answer.
Predict the correct take-off position and set the paddle start position to the number 1 wave. In the NO.2 wave takeoff position, make sure you are on the shore side of the wave. Otherwise, no matter how hard you paddle, the takeoff will fail.

Thank you. I found that I had to move to the correct takeoff position and the correct paddle start position.

The place where the waves break is not always the same. Predict the correct takeoff position and move quickly. If you wait in the same place, the takeoff will not succeed. For beginners, moving can be tiring. However, moving will definitely increase the success rate of takeoff.

Below is a story of my failure when I was a beginner. Please read if you like.

When I was a beginner, I wasn’t moving to catch the waves.
However, I was waiting for the waves at the same place.
Because I am a beginner, I have no physical strength and I get tired of paddling.
Also, it was not possible to predict where the waves would break.
I didn’t know that the vertical position of the wave was the takeoff position.
I avoided the vertical places of the waves because I was scared.

So I could only ride a few waves a day.
This was a great waste.

Causes of success and failure of takeoff

1.The top of the wave is not vertical. You cannot take off at this position.

2.No matter how fast you paddle, you can’t take off because the top of the wave isn’t vertical.

3.The top of the wave is vertical. However, the paddle is slow and you may not be able to tech off.

4. The top of the wave is vertical. The paddle is fast, so you will have a successful takeoff.

How was this article? Paddling can be very tiring for beginners.
However, even if you wait at the same place, you will not be able to ride the waves,
so please do go to catch the waves.

This method is very effective.
I would be very happy if the information is useful to you.
Thank you for reading.