Cause of surfing takeoff failure(4)-Why can’t you take off big waves? I will talk about how to challenge it / Methods / Tips 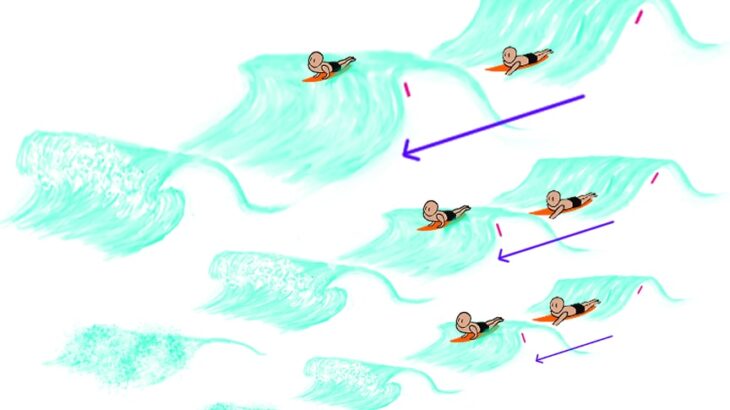 Please listen. I was scared again.

Yesterday the waves were so big that I couldn’t take off.

The size of the waves yesterday was shoulder high. It’s a big wave for beginners. You were scared, right?

I was beaten by the waves twice. I was scared. But I want to take off. what should I do?

Whether the waves are big or small depends on the skill of the surfer.
For beginners, shoulder high waves are big waves. For intermediate surfers, some people find double overhead a big wave.
Depending on the surfer, challenging the big waves is one of the pleasures of surfing.

I also want to ride the double over head wave someday.

This time, I will talk about how to take off in big waves.

Find out how to take off big waves.

Read the article below for the correct takeoff position.

I compared the take-off positions according to the height of the waves. Is there anything you notice?

I understand. For any wave, the takeoff position is vertical at the top of the wave.

For large waves, the takeoff position is quite high. The top of the wave is high. This is scary. Can I take off more in the middle of the waves?

That is impossible. You can always take off only at the top of the wave. Be prepared for the takeoff.

This is the takeoff of John John Florence. It’s a huge wave. Even in such a wave, the position to take off is the top part of the wave.

That is the correct answer. The bigger the waves, the more paddle power you need. You can’t take off just by having a fast paddle. It is essential to reach the takeoff position from the position where you started the paddle.

Paddling has two purposes. Be sure to read the following articles as well.

If I fail to take off, I will be beaten by the waves. I feel very scared. Is there a good way?

It’s scary to be defeated by big waves. Fear makes it impossible to take off.
I will teach you a good way. There are two types of takeoff failures. One is the failure of you to be swallowed by the waves. The other is the failure you are left behind in the waves.

Take-off failure / The case you are swallowed by the waves

Take-off failure / The case where the waves leave you behind

Which failure do you want for big waves?

I hate being swallowed by the waves. I want someone to be left behind in the waves.

Now, I will teach you how to practice taking off big waves.
You should start the paddle offshore from the paddle starting position you predicted.

Then I couldn’t reach the correct take-off position and couldn’t take off?

That’s fine.
If you can’t reach the take-off position, then start the paddle a little closer to the shore than you were in.

Still, what if I couldn’t reach the correct takeoff position?

Also, start the paddle a little from the shore side. After trying a few times, you will reach the correct takeoff position and succeed in the takeoff.

1st / Takeoff failed due to failure to reach takeoff position

2nd / Takeoff failed due to failure to reach takeoff position

I think it’s a good way. This method will reduce the number of times I’m beaten by the waves.

Why can’t I look at the bottom?

Because if you look at the bottom, you’ll be scared. Before takeoff, you need to check if there are other surfers on the bottom. After doing that check, you can reduce your fear by looking horizontally. You may want to read the following articles.

I’m still scared of big wave days. When I was swallowed by the waves, I couldn’t breathe and it was very painful.

As a human instinct, being unable to breathe is scary. There is a way to deal with this.

Please tell me how to do it.

It’s a breath-holding exercise. You can practice holding your breath in your daily life. If you practice every day, you will be able to hold your breath for a long time. It reduces your fear when challenging big waves.
I recommend reading the following articles.

I learned how to practice holding my breath. I was convinced that this practice would reduce my fear. Thank you very much.

Nobody wants to get hurt. Depending on the region and season, wearing a wetsuit protects you better than a swimsuit or rush guard.

When entering at the reef point, I try to wear a wet suit. But what I don’t want to get hurt most is my head and face.

If swallowed by the waves, cover your head and face with your arms to protect them.

I will do what you say.

You can also use a surfing helmet. I recommend the GATH helmet. It’s so compact and light that you can surf comfortably. (Maybe it looks a little ugly?) The GATH helmet is also used by Australian Olympic athlete Owen Wright. If you’re curious, read the article below.

How was this article? The big waves are scary for everyone. But if you know how to overcome it, you can surely take off the big waves.
thank you for reading.