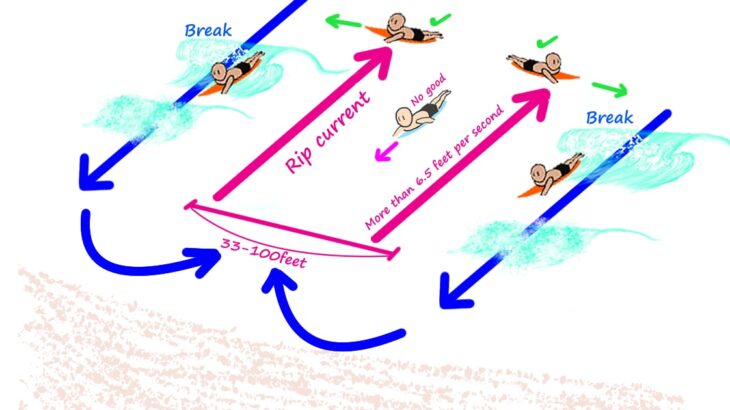 The Rip current was strong today. I was about to be washed off the coast. I managed to get back to land …

The power of the waves was strong today, and the Rip current was also strong.
It is common for people to be swept away by Rip current and die. This time, I will talk about Rip current.

・How to escape from Rip current

What is Rip current?

This current is very dangerous. There is an accident in which surfers and bathers are washed away and cannot return, resulting in death.

Since waves and currents are created by nature, there are cases that humans cannot imagine, so be careful.

Rip current is likely to occur in the following places.
・ Coast facing the open ocean
・ Shallow and long coastline
・ The coast where the waves come at right angles to the coast

In addition, Rip current is likely to occur near obstacles such as the side of an embankment. Below is an image of the surfing venue for the 2020 Tokyo Olympics.

The waves coming from offshore break white. After the break, it hits the shore, turns sideways, and goes offshore along the embankment. The speed of this Rip current is very fast. Surfers who know nothing will be very surprised.

There are many similar embankments on this coast of Japan. From time to time, beginners are swept offshore by this stream, unable to return and are dead.

The direction of the Rip current differs depending on the surf-in spot. If you ask a local surfer, they may tell you the current direction.

In the case of a beach break, the terrain changes as the sand on the seabed moves. Therefore, the position of the Rip current changes drastically. Let’s check in advance.

Example of how to find Rip current

・ Find a place where the coastline is uneven. Rip currents may occur in the concave parts.

・ There is a possibility that a rip current has occurred in places where garbage is collected or the color of seawater is different. Seawater may become turbid as sand is washed offshore by rip currents.

・ There is a possibility that a rip current has occurred in a place where the sea surface is rougher than the surrounding area.

・ There is a possibility that a rip current is occurring near the place where garbage is gathered on the coast.

Check the current before entering the sea

・ Ask local surfers and surfers who are familiar with the points about the current location.

・ Check the direction of the paddle of the surfer offshore. If everyone is paddling in the same direction, there may be a current.

・ Current is in a place where the topography of the seabed is deep. Waves are hard to break in deep places. Therefore, there may be a Rip current where the waves are not breaking. Also, dust may be floating or cloudy with wave bubbles.

Check the current even after entering the sea

・ When you enter the sea, check your position. Remember the location of trees and buildings on the shore. You can notice as soon as you are swept into the current.

・ If the current is strong, please go up to the shore while your physical strength remains. And stop surfing that day.

How to escape from Rip current

The way to escape from rip current is simple. Do not head straight to the shore, but paddle parallel to the shore. After paddle for a while, you will reach a place where there is no rip current. Then turn to the shore and paddle. Then you can go back to the shore.

The blue surfboard surfer in the middle is paddling against the Rip current. He cannot return to the shore from here. He will eventually get tired and swept offshore, dying in the worst case.

・ Believe that you will definitely come back alive.

・ Keep the surfboard. Surfboards are an important buoyancy.

・ In strong winds, lower your posture so that you will not receive the wind.

・ Check if the shore is approaching somewhere.
Depending on the flow of the tide, it may approach other shores.

・ If a rescue helicopter or fishing boat passes nearby, ask for help. However, it is difficult for rescue helicopters and fishing boats to find surfers floating on the surface of the sea. Sitting on the surfboard makes it a little easier to find. Also, make a loud voice and shake your arms exaggeratedly. Making it stand out even a little will increase your chances of being saved.

Summary
・ Rip current is dangerous. Make use of the knowledge gained in this article and act so as not to be swept away.

Thank you. I watch out for rip currents when surfing.