Danger at sea/Sea creatures / Natural phenomena attention: There is a YouTube video of the tsunami 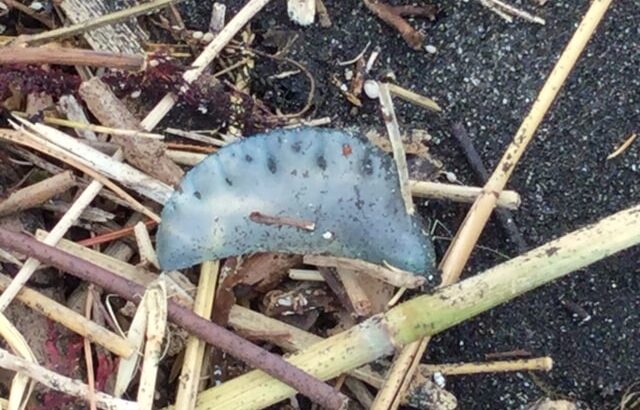 I will talk about the dangerous sea creatures I have encountered.

There is a stingray on the beach I often go to. Stingrays are buried in the sand. They don’t seem to run away when humans are about to step on them.
Even though it’s a fish.

If you accidentally touch or step on it, you will be stabbed by the sharp, hard, poisonous spines on the tail. It pierces wetsuits, marine boots and boots.
You will feel severe pain as if you were hit by the pointed part of a hammer. The pain gradually spreads under the knees so that you cannot walk, and in severe cases, fever and fainting may occur. Furthermore, like jellyfish and wasps, anaphylactic shock (acute severe hypersensitivity allergic reaction) may cause a decrease in blood pressure / pulse, and respiratory disorders may result in death.

I have stepped on it when surfing. Fortunately, stingray poisonous spines slightly scratched the surface of the ankle skin. I felt severe pain, but I was really lucky to have a minor injury. If poisonous spines had pierced my feet, I would definitely have to go to the hospital and wouldn’t have been able to surf for days. Since then, I try not to walk on the beach and paddle as much as possible.

I hate Portuguese man-of-war. I was stabbed again and again while surfing. It is highly poisonous and can cause severe pain when stabbed.
Portuguese man-of-war is widely distributed in the Pacific Ocean, Atlantic Ocean, and Indian Ocean. In many areas, bathers and surfers are affected.

The Portuguese man-of-war looks like a jellyfish, but it is not a jellyfish. In fact, it is a colony formed by a collection of many hydroworms. Each hydroworm has a role in the tentacle part, the torso part, etc., and is formed as one individual. It is a mysterious creature in which each individual is fused and is able to carry nutrients.
Oh, I don’t understand. It’s creepy.

The average tentacle is about 32.80 feet (about 10 m), and the long one is about 164.04 feet (about 50 m). This tentacle catches and eats small prey fish and crustaceans. The tentacles are poisonous and humans are also stabbed. In my case, when I was paddling my surf, my long tentacles got tangled in my hands and feet.

This is an image when I was stabbed in my thigh. It is red in the shape of a tentacle. It hurts very much.

What to do if you get stung by a Portuguese man-of-war. First, wash the stabbed area with seawater. Also, try to remove the tentacles by avoiding touching them with your bare hands. After removing it, cool it with cold water such as ice. If you are seriously ill, seek medical attention immediately.

Zoea is a crustacean larva such as shrimp, crab and hermit crab. Crustaceans do not look the same as their parents when they are laid from eggs. Crustaceans molt repeatedly and become parents.
Zoea is very small, about 0.07 inch (about 2 mm). It looks different from its parents, but it has a very hard shell , just like its parents.

The zoea has a weak swimming ability and floats in the sea. There is no intention of attacking swimmers or surfers. However, the hard shell sticks to the skin of bathers and surfers. It’s the worst if you get zoea between your swimsuit or wetsuit and your skin.

Below is an image of me being stabbed by zoea. It is red and swollen. It looks like an insect bite. The stabbed area becomes itchy. And it won’t heal for days.

What should I do if I get stung by zoea? I don’t know how to do it. Zoea has no poison. It is just a physically stabbed wound. I think I have to wait until it heals.

However, there may be ways to prevent it. It’s a way of not entering the sea. I have to hear from the surfer who entered the sea first that he was stabbed by zoea …

I have stepped on a sea urchin before. Sea urchin spines break really easily. Spines break when stabbed in the foot and remain in the skin. I had spines on my big toe, so I had pain every time I walked. I put up with it for a couple of days, but it won’t be solved unless I pull out the sea urchin spines.
Some sea urchins have poison and some do not. I don’t know which one I stepped on, but it wasn’t swollen, so I guess it was a non-poisonous sea urchin.

I decided to pull out spines myself. I sterilized the sewing needle by burning it with fire. And I broke the skin of the part where the spine was buried with a sewing needle. The spine breaks finely when hit by the sewing needle. It took about 30 minutes to successfully remove the spine.
Finally, it was disinfected with a disinfectant solution and completed.

There are ways to prevent sea urchins. That is to use leaf boots. I started wearing leaf boots at surfing spots with sea urchins.

Local surfers are very dangerous. They have territories. If you enter the territory, you will be attacked.

This is just a joke.
I apologize to the local surfers.

I will talk about danger due to natural phenomena.

Lightning basically has the property of easily falling to high places. Even if you wear small metal objects such as accessories and watches, the risk of lightning strikes is the same as when you are not wearing them. Lightning strikes are more likely to fall on the roof of a building or on the top of a mountain. In addition, lightning is more likely to hit people in places where there is nothing around, such as the beach or the sea.

In my case, when I hear the sound of thunder, no matter how good the waves are, I immediately evacuate to the car.

In my country, Japan, there was a big earthquake at 14:46 on March 11, 2011. The magnitude was 9.0.
This is the largest scale in the history of observation in Japan. It was also the fourth largest earthquake in the world since 1900, according to information from the United States Geological Survey (USGS).

I didn’t take the tsunami seriously before this big earthquake. I was wondering if I could surf when the tsunami hits. This was very stupid.
The tsunami is very dangerous. It’s completely different from the usual surfing waves. Normal surfing waves lose their power when they break. However, the tsunami causes a large amount of water to continue to flood the land for a long time.

What should I do if an earthquake occurs?

I think it is very difficult to escape from the tsunami. If you’re surfing in the ocean, it’s hard to feel the shaking of an earthquake. However, if you become aware of the earthquake, evacuate to a higher place as soon as possible.