Surfing trouble / Water does not come out of your ears and you cannot hear the sound / The cause may be a large amount of earwax?/Youtube*Browsing attention 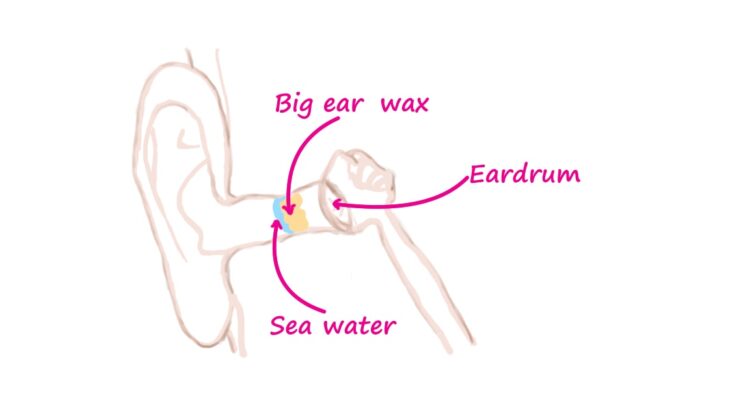 It’s very unpleasant to get water in my ears while surfing.

If water gets into your ears, you will not be able to hear the sound. You also lose your sense of balance. It will adversely affect surfing.

What should I do?

First of all, use earplugs. My favorite earplugs are introduced in the following articles.

However, it may come off if swallowed by the waves. Also, on a big wave day, even if you have earplugs, a little water may come in. Even if water gets into your ears, there is no problem as long as the water drains immediately. However, it is a problem if the water does not drain easily.

What is the reason why water does not come out of my ears?

I think there are various causes. In my case, it was caused by a lot of earwax.

Wavalien
What you can see in this article
A large amount of earwax may be the cause of the water not draining from the ears.

A large amount of earwax may be the cause of the water not draining from the ears.

I will talk about my case. The water in the right ear drains quickly. However, the water in my left ear did not always drain. I couldn’t get rid of the water with a cotton swab. This condition has been going on for a couple of years. Therefore, I went to the otolaryngology department. I wanted to know the cause. I thought it might be an ear disease.

What is the result of the examination?

There is such a thing.

The doctor removed my earwax with a cleaning tool. He showed me earwax. It was such a big earwax that I was very surprised.

After going to the otolaryngology department, I investigated the removal of earwax on YouTube. There was a very good video, so I will introduce it.

I had big earwax like this video in my ears. Also, I used a cotton swab to push the earwax near the eardrum, as at 1:48. I think many surfers use cotton swabs. Be careful not to be like me.

The doctor removed the earwax, and the water in my ears quickly drained. No more worries when surfing. I feel very happy.

Wavalien
Summary
If water doesn’t drain from your ears, it may be due to earwax.
Why not consider going to an otolaryngologist?

After having my doctor remove my earwax, I watched various YouTube videos. It’s grotesque to see the earwax removed, but it’s also fun. Please see if you like. Your ears may also have this kind of earwax.