Surfing/Which is the best fin? /Future vs FCS/Comparison of fin shape, material and weight 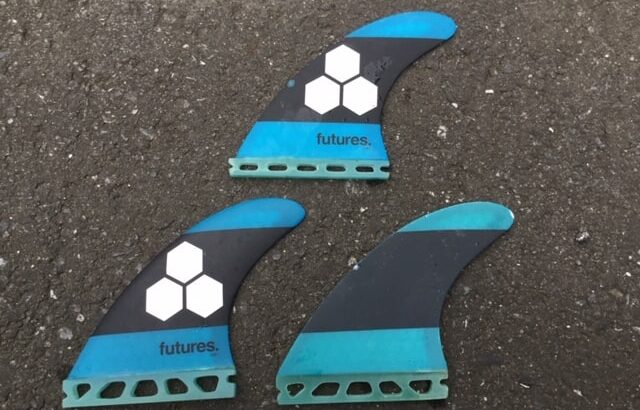 You always use Al Merrick fins.
Do you use other fins?

You won’t know which fin is better until you try it.
So I recommend using different fins.

However, it is better to have a basic knowledge of fins.
This time, I will tell you about fins.

You can get a basic knowledge of fins.

You will be able to understand how to select fins.

A personal review of my fins.

The area of fins

Choose a fin that fits your weight.
Basically, the larger the fin size, the better the stability and straightness.
As it gets smaller, it becomes more rotatable and manoeuvrable.

For beginners, especially those practicing take-off, choosing a larger fin will increase stability and improve stability.
It will be easier to take off. Also, for those with weak legs and women, choosing one size smaller makes it easier to move the board.

The base of fins(the surface in contact with the board)

The angle of fins

Fins have a great effect on driveability, etc. due to the difference in flexibility depending on the degree of hardness and softness.

Which is the best fin system? Future vs FCS vs FCS2 vs Glass on fin

This is a very good product.
Finpuller makes it easy to install and remove FCS2 fins.
It won’t hurt your hands. It won’t damage your surfboard. Wonderful.

It is a soft material. You can pinch the fins.

When installing the fins, push it in from above.

When removing the fins, lift the fins from below.

Are the fins for tightening screws different between Futures and FCS?

The two on the left are Future fin keys. The two on the right are FCS fin keys.
The lengths are different, but the tips of the keys have the same shape.
Therefore, it doesn’t matter which fin key you use.
You can tighten the screws with any fin key, whether it is a Future fin or an FCS fin.

A personal review of my fins.

I will review the fins I have. Fin ratings depend on the surfer’s taste.
Please read it as my personal impression.

Bellow is my information.

The best fin I think is AM1. AM1 is M size. (AM2 is L size, AM3 is L size)
Fins designed by Al Merrick. I think it has excellent acceleration.
It is easy to make turns with a large radius and turns with a small radius.
The turn is stable.
The area of ​​the fin in the middle is a little small and it is easy to turn at the top of the wave.
I love AM1. Great performance for big, powerful waves and small, weak waves.
I own a total of 5 AM1 fins. Even with the same template, the weight and flexibility will differ depending on the material. I will introduce them in my favorite order.
I think AM1 is a good fin for beginners.

The center fins and side fin were overlapped and the sizes were compared.
The bottom is side fin and the top is center fin. You can see that side fin has a slightly larger area.
It’s a small difference.
However, this slight difference makes the performance of AM1 extremely excellent.

These are standard fins.
Demonstrates stable performance regardless of the level of the surfer.
It can be used in all wave conditions.

The YU fin was designed by Yoshinori Ueda, a famous Japanese surfboard shaper.
The area of ​​the tip of the fin is small. The center fin is smaller than the side fin.
(This is the same concept as Al Merrick’s Fin AM1)
Fins that are easy to control. It feels a little loose.
I think it’s easy to change direction when off-the-lip.

I love thrusters. I’m sure it’s the best performance on every turn.
I hate quad settings. Since there is no center fin, the tail is loose.
Off-the-lip in the vertical direction is also difficult.
The following small fins are for center mounting in addition to the quad setting.
It’s a small fin, but the tail doesn’t loosen.
However, when the surfboard is tilted too much, the center fins come out of the water and the tail becomes loose,
just like the quad. This gives you both thruster and quad feel.

Fix it with screws in the same way as fins.

You can easily fill the holes in the plug as shown below.

You can easily remove it by inserting the fin key into the hole above BOXSTIX.

How much is the effect of BOXSTIX?
I actually surfed with BOX STIX.
At my level of surfing, I don’t feel a big difference.
However, I believe it works because I filled the big hole in the future fin box.

What to do if Future fin cannot be installed

In some cases, my newly purchased Future fin didn’t fit in the plug.
The fins are just a little bigger than the fin box and won’t fit.
In that case, use sandpaper.
Shave a little bit of the part where you don’t need the fins.

Below is a case where only the front part of the glass fin base did not fit into the fin box..
Fins made of glass can be easily scraped.
Be careful not to scrape too much.
I got into the fin box with just two scrapes

The following is a case where the entire base part of the fin did not fit in the fin box.
The fins were made of a hard material, so I scraped them many times.

What to do if you can’t turn the FCS screw

The cause is that the FCS screw was tightened too tightly.
At that time, I was screwing hard to avoid the FCS fins coming off.
Therefore, I imagined that the hexagonal hole of the screw was sharpened and the fin-key was spinning.
I bought a new screw.

But later, I came to know the true cause.
It wasn’t the screw holes that were being scraped.
It was Finky that was being scraped.
I replaced the fin key with a new one.
Then the screw turned and I was able to remove the fins.

I imagine the fin-key material is softer than the screws.
If the fin-key runs idle, please try replacing the fin-key with a new one first.

I began surfing at the age of 27 years old. Thereafter I continue surfing more than 20 years.

I know many methods to improve in surfing. I release the method to everybody. (I tell you about me’s original method.)

I am a Japanese.
I am not good at some English.
There may be a little unnatural sentence, but please permit it.